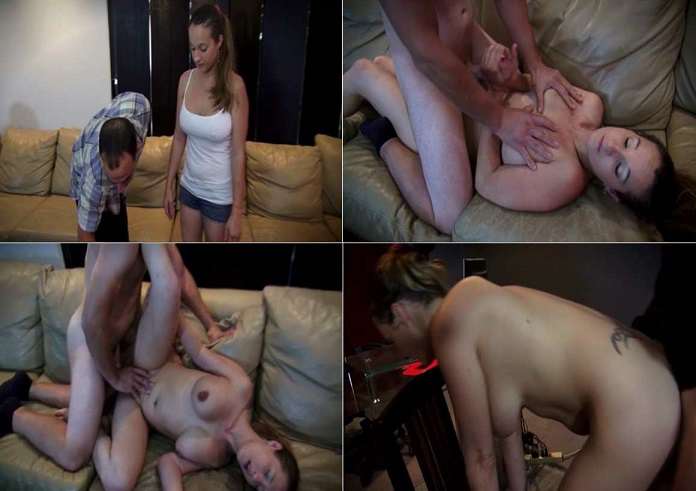 This is a sequel to MILF 1561. Frank has continued to use his company’s pioneering mind-control device on his step-daughter Lexi. Life at home has been much better for him as a result. Lexi does not say a word to her step-father unless commanded to do so. Frank can freeze her and have her be a motionless doll for as long as he wishes. Now that Lexi is no longer rebellious, he has come to enjoy her company a lot. On a typical day of step-father-step-daughter bonding, he starts out by having dinner with her. He talks openly, and Lexi listens vacant-eyed. He then spends some time surfing the TV while Lexi lies next to him on the couch, keeping him company like an obedient pet. Frank keeps her stored in a closet so he does not have to worry about her partying anymore. Sometimes he just places her naked somewhere in the house in case he wants to relieve himself. He enjoys a game of pool with her on display on the table. To entertain himself he shoots balls between her legs. Then he toys with her hot tight pussy and caresses her firm young butt. But his fun is cut short by a visit from his star employee Eric. The young man has found out what his boss has been doing with the mind-control device. He threatens to go public about it unless Frank lets him have Lexi. Eric has always wanted her badly. There is only one problem: Lexi cannot stand him. When Frank summons his step-daughter and offers her a date with Eric, she flatly refuses. The device controlling Lexi’s mind has been temporarily deactivated, and she is acting like her usual rebellious self. Frank hits a switch on his laptop that reactivates the device. Immediately Lexi ceases to move or speak. She has once again become a doll-slave. With a sigh, the step-father gives the device’s controls to Eric. She is all yours – he tells the young man. Eric is delighted. He intends to fuck Lexi right there and then. He even orders his boss to watch. Frank has to obey because of the compromising information Eric has on him. Quickly the young man strips Lexi naked then starts to fondle her unmoving body. Next he sits her up and makes her stroke his cock and suck on it. Finally, he fucks her from behind, side on, riding his lap, and on her back – before filling her mouth with his cum. Lexi remains in her silent zombie-like state throughout. Frank reluctantly witnesses every detail of his step-daughter’s fucking. The following day Lexi comes to see him in his office. She demands to know why Eric is expecting her to go on a date with him. The mind-control device has again been switched off. She is herself once more. However. she cannot remember anything that Eric did to her. Frank is not about to explain things to his step-daughter. Instead he switches the device back on to shut her up and make her obedient again. Remembering the hot scene he saw the day before, he now decides to fuck Lexi for himself. Soon he has her naked, kneeling, and sucking his cock. After bending her over a chair and taking her from behind, he blasts his creamy cumload all over her face and tits. Lexi does not so much as blink. Frank much prefers his step-daughter like that.