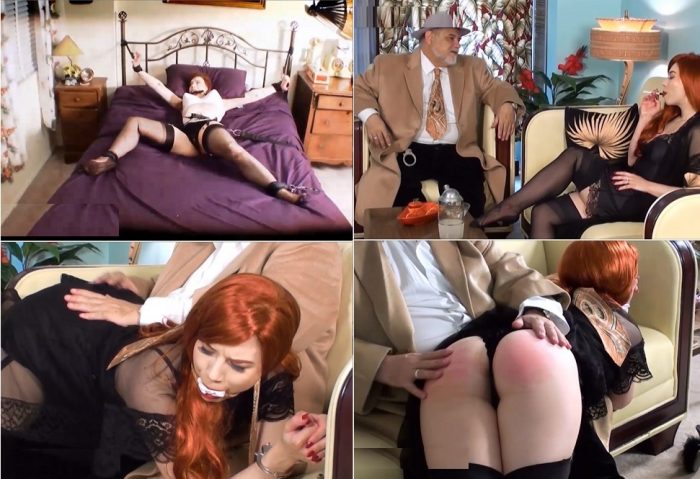 Detective Doyle is investigating underground bondage films during the time they were considered highly controversial. One model that keeps popping up is Ludella Hahn, having appeared in many photos and films alongside the likes of Bettie Page and others. He finds himself drawn to her and even gets turned on watching the films he was supposed to be using simply for research, watching her body writhe bound spread eagle to a bed in stockings and a pointed bullet bra with a bitgag in her mouth. The way her stocking feet wrinkled up when she squirmed and Mmmphed through her gag. It probably wasn’t a great idea for him to stay on the investigation with the way it was affecting him, but he tracks her down and pays the redhaired femme fatale a visit in her swanky apartment downtown.

She is calm and nonchalant about the entire situation, answering his questions while smoking a cigarette (vaping) and drinking a martini in nothing but a slip, sheer robe, and stockings. She doesn’t take him seriously until he threatens to put her away, and even then, she simply tries to persuade him, “What do I need to do to make this go away? The must be…something…”

With the films still on his mind, the detective tells her there is something she can do. He’s going to bind her up like in the films. He handcuffs her and gags her with handkerchief stuffing and a stocking. Then he puts her over his knee and gives her a good old fashioned spanking on her big butt. He keeps spanking her until her bottom is nice and red and then he leaves her there, still cuffed and gagged, rubbing her nice red bottom and whining from the pain. In a pouty huff, she lights up her cigarette and yanks down the gag. How will she get out of this one?