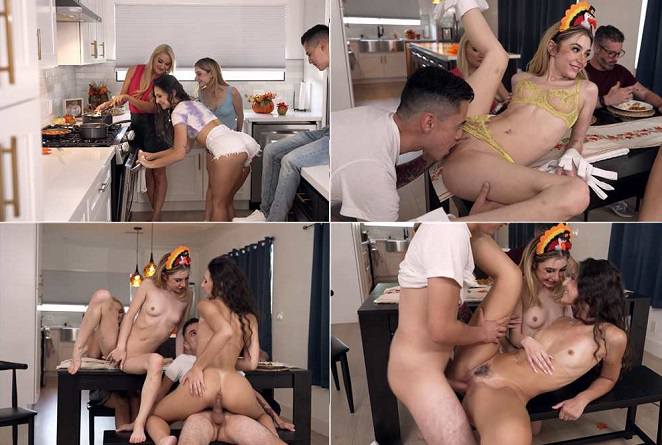 Julia Robbie is making Thanksgiving dinner with her daughter Demi Hawks. Demi’s husband, Mike Mancini and his son Juan Loco are in charge of setting the table. Demi’s friend, Liz Jordan, is helping out where she can. Julia shares with the girls that the secret to making a great dinner is putting herself into the food, which gets Demi thinking. She decides to put herself into the food by dolling herself up in lingerie and laying on the table like a turkey that needs stuffing…

When Demi calls the family in for dinner, they all pause at the foyer. Everyone takes a seat and tries to pretend everything is normal, but the meal is awkward as Demi keeps on posing. Liz is finding it really hot to have such a nice view of her BFF’s cooch, and Juan is feeling the heat as well. When Liz sees Juan looking, she flashes her tits at him and then crawls under the table to begin giving him a Thanksgiving BJ. Unable to resist the temptation another moment, Juan slides Demi’s thong aside and eats his stepsis out before stuffing her properly full of the D.

Juan and Demi’s parents just keep ignoring the exhibitionism on display in front of them as Liz, Juan, and Demi go for an all-out threesome right on the table. Lis peels off her clothes and rides Juan’s hardon, then lays back on the bench and lets him fuck her nice and deep. Then Juan lays down so Demi can bounce away in reverse cowgirl. Julia brings out some pie for dessert, but admits she forgot to buy some whipped cream. Grabbing the pie, Liz tells her friend’s dad not to worry. She waits until Juan creampies Demi, then holds the pie beneath her BFF so that Juan’s load of cream drips free onto the pie.