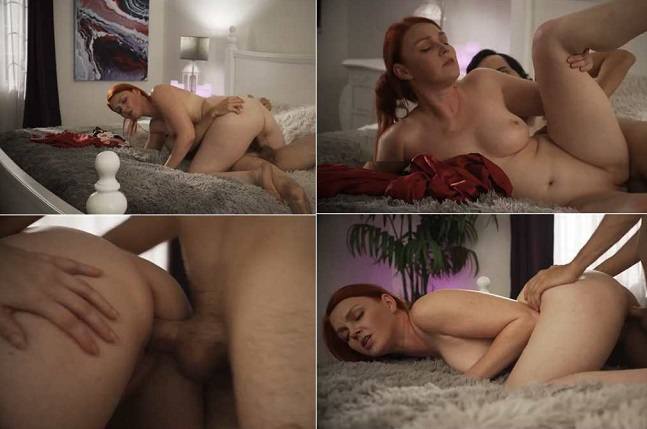 “It all started when my stepmom crept into my bed in the middle of the night”.

A big smile crosses her face as Marie closes her eyes, feeling Ricky’s cock-head pressing insistently and repeatedly against her pussy, when a voice cries out -from her husband: “Marie? What’s going on!”. “You were snoring”, she responds meekly. “What are you doing on the floor?”, dad asks, as Ricky has fallen by the side of the bed, his nakedness hidden by the covers he grasped with him. “I don’t know”, Ricky stammers, and stepmom adds: “He must have fallen off the bed. He sleeps so heavily”. “Come to bed Marie”, her husband demands, and she answers: “Coming!”. She gives Ricky a kindly kiss good night on the cheek, and ignores his plaintive plea of: “Stay with me”.

In the morning Marie is having coffee in the kitchen when Ricky enters, dad having gone off to work already. She tries to apologize about last night, but Ricky shrugs it off. “Have you considered leaving him?”, he asks. “I’m 19 now -he can’t keep me here, or you. He doesn’t treat you the way you deserve to be treated”, he argues. A car horn outside insistently honks, interrupting them, and Ricky rushes off with his ride.

Marie wearily goes to her bedroom and slides open the closet door, fetching her roll-on suitcase. She places it on the bed and gets a towel from the dresser drawer, getting ready to take her morning shower. As the water’s running, Ricky returns, and calls out to her inside the bedroom, noticing the suitcase on her bed. He surprises her in the bathroom, mom clad in her towel. He’s about to leave, when she commands: “Stop. Turn around. I want you to see me”. She drops the towel, revealing to him her voluptuous naked body, quietly beckoning: “Come here”.

He comes to her and Marie starts rubbing his groin, causing Ricky to whisper: “That feels so good”. “It’s okay, as long as we don’t go all the way”, she murmurs. She unzips his jeans and pulls out his big cock and begins stroking it. “You can be mine, mom -you can leave him and start up -you with me”, Ricky says, breathing heavily. They kiss repeatedly as she continues giving him a hand-job. Ricky points his hard cock between her legs and begins a dry hump, thrusting against her standing up, as he grabs her big butt with both hands. “I want to be inside of you, mom”, he murmurs. Watch the taboo romance unfold…