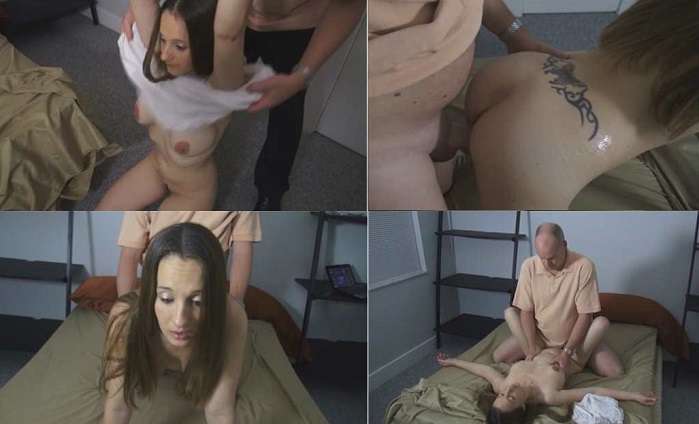 Part two of MILF1561. Meanwhile, Frank has gotten so horny that he is ready to do anything with Lexi – no matter how taboo. He lowers her onto her knees and lifts her t-shirt over her head to leave her naked. He then quickly takes off his pants, comes to stand with his big hard cock before his step-daughter’s mouth, and starts fucking into it. Holding his hand at the back of her head, he deftly controls the movement of her lips up and down his length. Occasionally, by verbal command, he gets Lexi to freeze right in the middle of sucking him off. Then he pulls out of her mouth and leaves it fixed in an O shape. To finish off, he gives her a few cock-taps on the face, and a few taunting words. Lexi makes no reply. Warmed up as he is, Frank proceeds to fuck his step-daughter in all manner of ways. First he has her get on the bed on all fours. From behind he pounds hard and deep into her pussy. The young woman obediently works her body and back and forth to complement the in-and-out pumping of her step-father’s cock. Courtesy of the chip, she wears a plain, unthinking expression. In addition, her movements continue to be stiff and mechanical. Frank himself is delighted with his new step-daughter-doll. Again he puts the freeze function on her to prolong the sweet sensation of her tight pussy around his cock. He does much the same when Lexi fucks him in two further positions – missionary and cowgirl. Her young body is all his – to play with however he desires. She knows nothing of his hands roving over her naked skin, or his lips closing around her nipples. She is equally unaware of herself willingly opening her legs as wide as she can to take her step-father to her ultimate depths – or of how vigorously she bounces up and down and grinds herself on his lap.