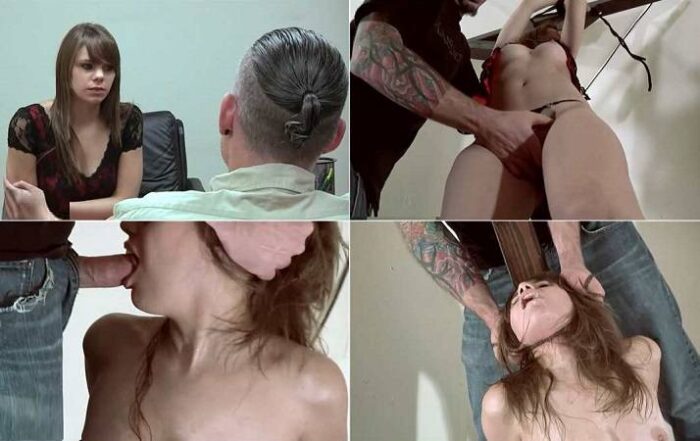 Tessa needed money. It was tough times now-a-days and she was desperate. She answered an ad for photography and now she sat nervously at the interview. The interview was going fine until he told her it would be nude modeling. She did not want to do that. So, she got up to leave, but he blocked her way. When she tried to push through, he grabbed her in a hold. She passed out. He dragged her off. Now, she was someplace else, supported by her wrist, against a post. He came in and started to work on her. First, he felt her up, then he ripped her blouse in two. He twisted her nipples until she screamed in pain. He hit her. Later, he found her taser she was carrying in her purse. He used it on her, running it up and down her body-watching her shake. He pulled her down, forcing her to suck his cock until she gagged. Then he through her down on a mattress and fucked her for a while until he came inside her. He left her curled in a ball, sobbing. He had her tied back on the post and her to orgasm. she squirting liquid and moaned the entire time. Then, he had her arms overhead in the middle of the room, and tasered her some more.