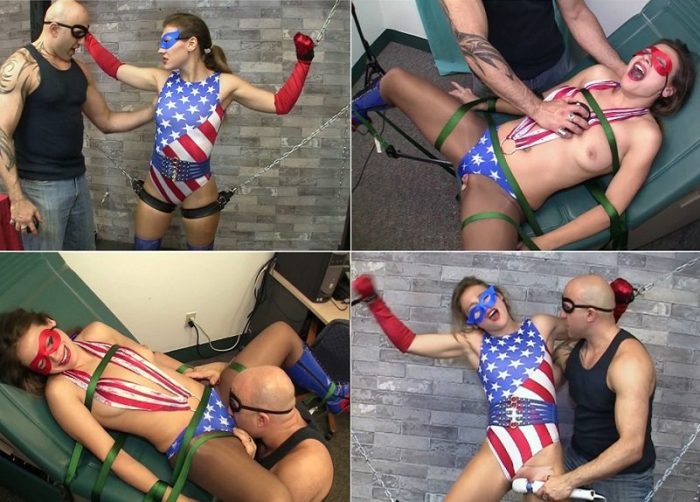 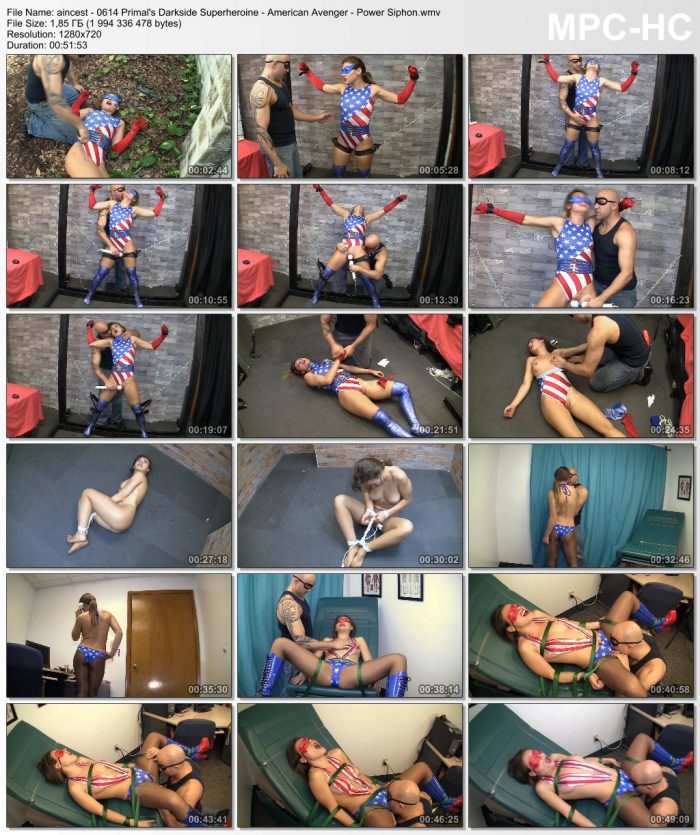 American Avenger is one of the most feared superheroines in New Arcadia and with good reason. She is fast, strong, agile and tough as nails. She has tracked a thief who somehow managed to steal secret technology from a government lab. She orders the thief to surrender but instead he pulls out his 9mm and opens fire. With an incredible display of acrobatics she dodges the shots and covers the space between them, disarming him and delivering a powerful blow to his stomach. The thief is a seriously tough customer himself and doesn’t drop, but takes a swing at AA. She cartwheels away from the blow and then does a back flip when he tries to sweep her legs out. She soon beats the thief down and then stands over him gloating while he begs for mercy

AA is too over confident and the thief surprises her with a zapper that stuns her and makes her scream in pain as her body convulses and she falls. 100,000 volts is not enough to keep AA down and she begins to rise, but the thief zaps her again and she drops convulsing even more. Again he zaps her, gloating as he does it. He then rolls her over to see her face and zaps her a final time. He then retrieves his 9mm and points it at her head, he can be the one to put an end to AA and be famous and feared! But he gets a better idea. Thief takes her back to his lair, carrying her limp body over his shoulder

Back in his lair thief has AA chained up. (LONG TAUNTING, GROPING, ROUGH HANDLING AND THREATENING, FORCED KISSING AND A VERY DEFIANT SUPERHEROINE THE SPITS AFTER BEING KISSED)

AA is weakened and beaten and she is overcome with sheer terror as Thief explains how much the Power Siphon is going to hurt. She screams in agony as the device drains her strength and powers and collapses as the device becomes full

She has survived the siphon so Theif strips her and then ties her up and dumps her in an ally. AA wakes up, she is ashamed and scared but rallies her strength and gets free

PROLOGUE- American Avenger has been spending time recovering mentally and physically from her ordeal with the Power Siphon. Meanwhile a rash of violent crimes has broken out in New Arcadia. Finally AA can not stand to be on the sidelines any longer and she dons a new uniform (that she has never considered wearing before) and she goes out to restore order to the city

AA responds to a call about a break in at a medical clinic and finds herself face to face with Thief, At first Thief is scared but he takes aim and is about to pull the trigger when AA does a lightning fast cartwheel shattering his 9mm with a perfectly aimed boot. It is payback and she slams Thief against the wall. But he is stronger than he was before and she is weaker and it becomes a tough hand to hand fight. He almost beats her with a iron grip low blow but she prevails and gloats over him

Her confidence is fully restored and uses the phone to call the police, but Thief is not down for good, he has too much of her power to be easily beaten. He uses the syringe and jumps her from behind. As the room spins and she gets groggy Thief explains he was taking the medicine to help slow his super elevated heart rate, a side effect from getting her powers that has been making it impossible for him to sleep. He lifts and slams AA down and then uses two full sets of restraints to keep her just where he wants her.