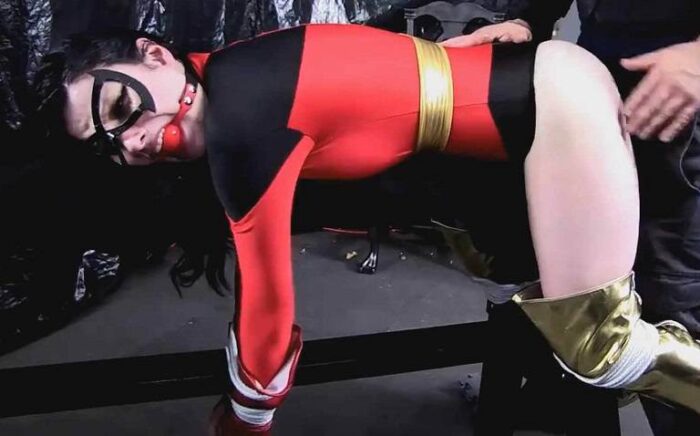 Years ago a small comet crashed to earth bestowing a small group of women a portion of its strange energies. Many of these women used this incredible “star energy” to become superheroines. The mightiest of these women become known as Power Star.

Years ago an aggressive, brutal and ambitious crook of the common variety was hired to help a very talented thief steal technology from Starr Science Solutions. The cook double crossed the thief and took the technology for himself. It was a device able to siphon energy from almost any source and the crook managed to use it to steal power from one of the greatest superheroines of the time, the American Avenger

Power Star is ambushed by Cyphon, she is confident and easily has the upper hand, even resisting the power siphon, but when she gets too cocky Cyphon takes a chance and again uses the device slamming in against her less invulnerable pussy. The device locks on and begins to drain her. Power Star is weakened and only luck keeps Cyphon from finishing her

Power Star has tracked Cyphon down, she is ready for him this time and doesn’t plan on taking chances, her full strength hasn’t returned . She wants answers from Cyphon but it is a trap and a very powerful gas takes her down.

The device is full and Cyphon mocks the greatly weakened Power Star. He places a mask over her face and she tries to struggle but she goes out. Left exposed and bound.

Power Star again tracks Cyphon down, he has her stolen costume up as a trophy. Power Star is more cautious now, she has recovered only partly from his previous attacks. But she isn’t ready for Cyphon to have a weapon that uses her own stolen energy against her. The ray overwhelms Power Star and she drops to her knees, but Cyphon doesn’t stop until she is out

Power Star wakes up and with her heroic will summons enough of her strength to snap the shackles, she tries to surprise Cyphon but he has abosrbed a lot of her power and she is still weakened. He easily over powers her and then, taunting the fallen heroine, he puts her out with an arm around her neck in a sleephold

Power Star is again restrained, but this time, feeling very strong, Cyhon is going to fuck her into submission. His super strength thrusts and invincibly hard cock pound Power Star to painful shameful orgasms. She is virtually destroyed by the time he finishes all over her face and she is left staring blankly covered in shame