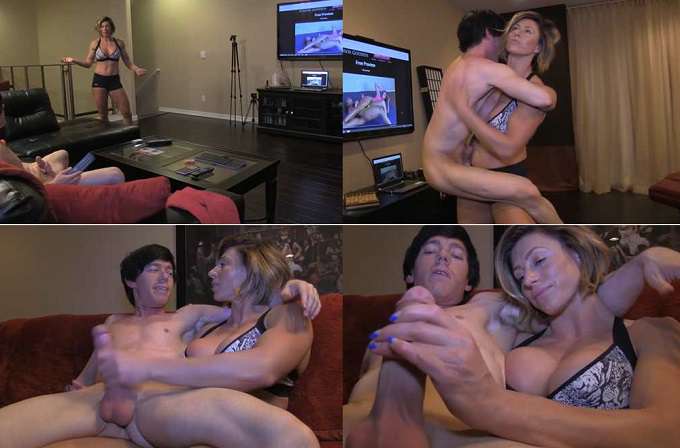 Rapture walks into the living room to find her step-brother sitting on the couch, and masturbating to her wrestling clips. Rapture is appalled at first, but her step-brother confesses that he’s really into her muscles. Rapture tells him that she’s going to tell their step-mom, unless he does one thing for her. She wants him to get up on her shoulders so that she can carry him around. If he does this, then she won’t tell step-mom anything at all. Her step-brother agrees, and she puts him into an over the should lift, and starts to stroke his cock. Next, she puts him into a fireman’s carry, while continuing to jerk him off. She changes carrying positions a few times, and then the camera fades to black.

Part 2 picks up right where part 1 left off, with Rapture carrying her step-brother while she strokes his cock. She puts him into a bear hug carry, and carried him over to the couch, where she tells him to sit on her lap while she continues to stroke his cock. Rapture changes things up a bit by stroking his cock with her huge bicep. She tells him that she’s going to stroke his cock until he cums, but suddenly changes her mind. She stands up, telling him that she is going to tell step-mom, and that he is a disgusting loser.