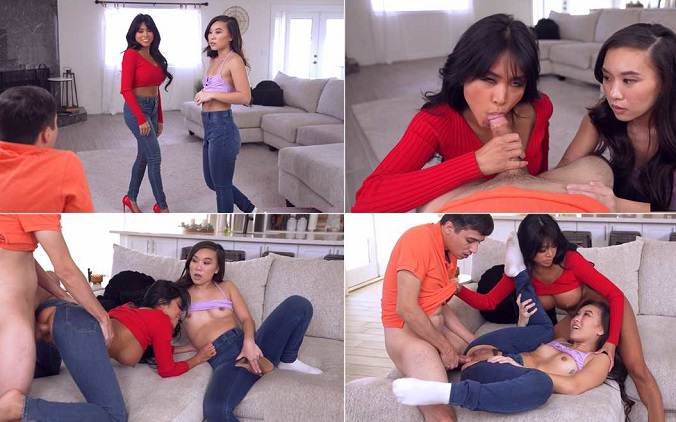 Kimmy Kimm and her boyfriend Ricky Spanish are arm wrestling when Ricky’s stepmom, Ember Snow, walks in. She watches Kimmy lose and then suggests that Kimmy could beat Ricky if they leg wrestle. When Kimmy doesn’t know what that is, Ember demonstrates. Kimmy loses again, and Ember suggests that Kimmy should do squats to work out. The girls do a squat competition as Ricky watches from behind…

When Kimmy goes too low in her jeans, they tear open from behind. Not to be outdone, Ember goes so low that hers split open as well. Turning around, Ember sees that Ricky is really liking it and offers to help him out with that stiffie. She accuses Kimmy of not wanting to lose again when Kimmy expresses surprise that Ricky’s stepmom would even offer. Next thing Ricky knows, he has two women’s hands and mouths all over his dick as they compete to give him the best BJ.

Why would the competition stop there? Ember announces she can fuck Ricky better and proceeds to get on her knees so he can fuck her in doggy through the hole in her jeans. Not to be outdone, Kimmy gets on her back so Ricky can dick her down. The holey jeans vanish before Ember hops onto Ricky’s cock to ride him in reverse cowgirl while Kimmy masturbates and licks Ember’s big boobs. Then Kimmy gets to enjoy Rick’s cock in doggy while eating Ember out. As Ricky pulls out to nut on Kimmy’s bottom, the girls begin bickering again right up until Ricky’s dad walks in on them.