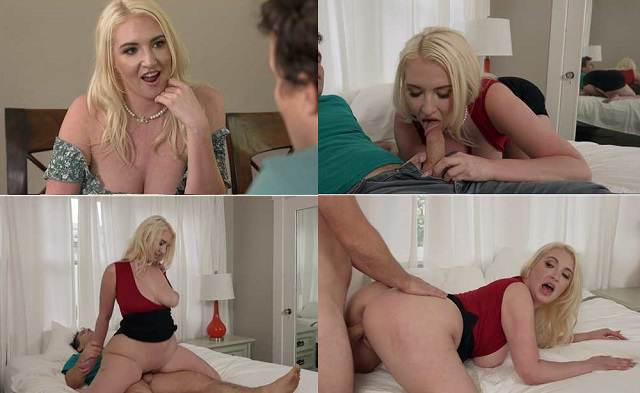 Robby Echo and his new stepmom Kate Dee are just getting to know each other. Over ice cream, Kate starts asking Robby questions about himself. Each of Robby’s answers is flattering to Kate, who’s really digging it. When Kate asks Robby his favorite outfit that he’s seen her in, he pushes the envelope by saying that it was when he walked into the bathroom last week and saw her in a towel. That prompts Kate to ask Robby his favorite fantasy, which is revealed to be getting fucked by a hot milf who tucks him in. Now that Kate has confirmed that Robby is flirting with her, Robby turns the tables and begins asking her questions. She tells Robby that her favorite fantasy is him watching her getting fucked, not by his dad but by a stranger. That’s not really Robby’s thing, so Kate tells him her second favorite fantasy is straight up him fucking her…

When Robby hesitates, Kate accidentally on purpose drips some ice cream on her big boobs. Dredging her fingers through the sweet cream, she licks it up before leaving Robby to it. From then on, there’s some serious sexual tension between stepmom and stepson. Any time they come together, Kate is wearing something hot as hell that shows off her cleavage. Things keep ramping up until Robby tries to confront her about it. Instead of taking the conversation seriously, Kate offers to show Robby her tits. She pops them out and puts Robby’s hands on them, then offers to fuck him and tuck him into bed.

Pushing Robby backwards, Kate climbs on top of him and makes good on her promise. She kicks it off with a blowie that proves she’s unparalleled with her mouth. Once she’s done sucking and teasing Robby’s dick with her big naturals, Kate climbs aboard to ride her stepson in reverse cowgirl. Getting on her hands and knees, Kat squeals in delight as Robby enters her from behind and gives it to her in doggy. Kate has already gotten off, but there’s always room for more orgasms as she rolls onto her back and spreads herself wide open for Robby to kneel between her thighs and take her to pleasure town one more time. When Robby is on the verge of popping, Kate lays back and urges him to cover those knockers with his big load so she can rub it all into her boobs before tucking Robby in as promised.