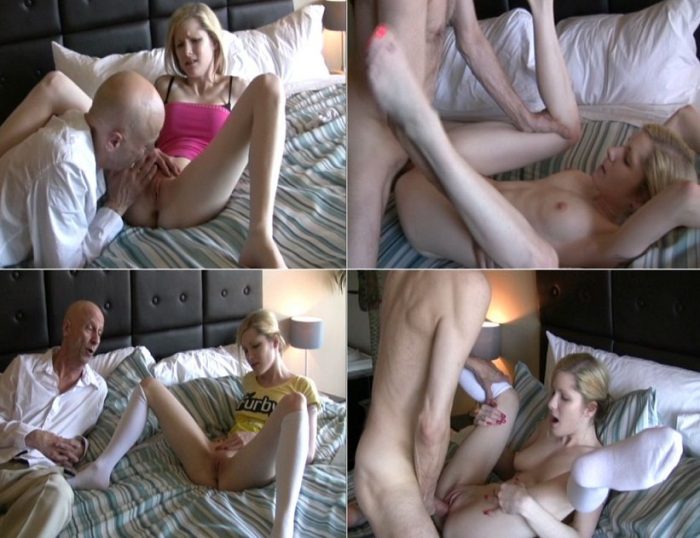 THE COMPLETE FAMILY ALBUM OF A BEAUTIFUL 18 YEAR OLD GIRL!!! SKYLA GETS WHATEVER SKYLA WANTS!!!! Skyla knows how to get whatever she wants…..by being “nice” to her Daddy!!!! Here is her Stunning Family Album!! Included are : “Breaking Curfew” “Wrapped Around My Finger ” “Louis Vuitton Purse” “Daddy Sleepwalks” & “Daddy Called Me A Slut”.

Scene 1: Breaking Curfew – Skyla has returned home….VERY VERY late at night….well past her Curfew. Her Dad is waiting up for her, and he is furious!!! It is past 3:00 AM!!! To make things even worse….Skyla is Relaxed!!! VERY VERY Relaxed!! Skyla’s Dad tells her that she is Grounded for two weeks for Breaking Curfew…but she is so tipsy, that Shyla decides to “seduce” her own Dad…to convince him to let her off. Before he can protest her advances….Skyla has his pants down and his cock in her mouth!!! When he is hard…the Relaxed Skyla bends over the bar….and her Dad shoves it into her from behind!!Skyla screams in pain because her Dad’s cock is so big!! they Fuck hard until Skyla takes her Dad’s load right in the mouth!! Dad promises that the Grounding is off….as long as Skyla Breaks Curfew again the next night!!! Ha Ha Ha!!

Scene 3: Daddy Sleepwalks – Skyla was just out of the shower….talking to her girlfriend, Jennifer, on the phone….when something bad happened! REALLY, REALLY BAD!!! As Skyla is on her bed, wearing nothing but a towel….her Dad walks in…..problem is….he’s not awake….he’s Sleepwalking!!! Skyla tells her girlfriend how terrified she is….as her Dad sits down on her bed, and begins to caress her leg…and then starts to lick her cunt!!! Panic-Stricken….but knowing that it is dangerous to wake up a Sleepwalker….Skyla can only hold her breath in terror as her Dad licks her Pussy. “Oh No Jen!!!….he thinks I’m Mom!!! Mom always said that Daddy gets horny when he’s tired……”. Skyla hangs up the phone…and her nightmare only gets worse, as her Dad shove his penis inside her mouth, and Forced her to Suck it!! Afraid to wake him up….Skyla lets her Dad shove his cock in and out of her mouth. When his cock has grown to a MASSIVE size….Skyla’s Dad…calling her “Evelyn (her Mom’s name)…bends Skyla over…and begins to Fuck her very hard. Calling her Evelyn over and over….Skyla’s Dad gives her a real Pounding, before he ultimately shoots his load all over Skyla’s stomach. Poor, young Skyla is in tears as her Dad calmly Sleepwalks back to his own room…leaving her covered in sperm!!!

Scene 4: Louis Vuitton Purse – Skyla is a very spoiled young girl….who is used to getting what she wants ALL the time. Skyla has her Daddy wrapped around her little finger, and she usually just needs to smile and pout….and Daddy gives her whatever she wants. Today, however, Skyla’s “wish-list” spirals a little bit out of control!! When she returns home from the Mall, and finds a whole in her purse….Skyla decides that she wants a brand new purse….a LOUIS VUITTON PURSE!!! Problem is…they start @ $1200!!!! Skyla calls in her Dad and tells him her “predicament”, but Dad tells her that there is NO WAY she is going to get a $1200 Purse. Skyla whines for a while and tries to convince her Dad to spoil her….but no luck this time. Dad tells Skyla that for a Present this expensive, she is going to have to earn it.Skyla is about to discover that her Dad is a Pervert…a real SICK Pervert. When Skyla asks how she can “earn” the Purse….her Dad confides to her that he has a Foot Fetish…and he has always admired her feet…so if she’ll let him lick her feet…then “maybe” he’ll consider buying the Purse. Skyla tells her Dad that her feet are stinky…but agrees to let him suck them. Dad devours her feet (they are SPECTACULAR btw)….but then Dad makes an additional demand…he wants to lick her Pussy too!! Skyla is disgusted by the request…but she wants the Purse so bad…she peels off her jeans and cringes as her Dad goes down on her. To make matters even more difficult….and to disgust Skyla even more…Dad wants to eat out her Asshole!!! Skyla can’t believe it!! Her Dad attacks her Asshole….sticking his tongue all the way up inside…and drooling over it!! Skyla tells her Daddy that what he is doing is “gross and disgusting”…but he is enjoying it immensely!! In order for her to get her Purse…Dad has one more inappropriate demand for his Daughter…he wants to Fuck her!!! Skyla makes him promise that if she allows him to do that…that she will get the Purse for sure. dad makes her the promise…and Skyla is crying as her Dad Pounds away at her….Fucking her very hard…and leaving a Giant pool of cum on her young stomach!