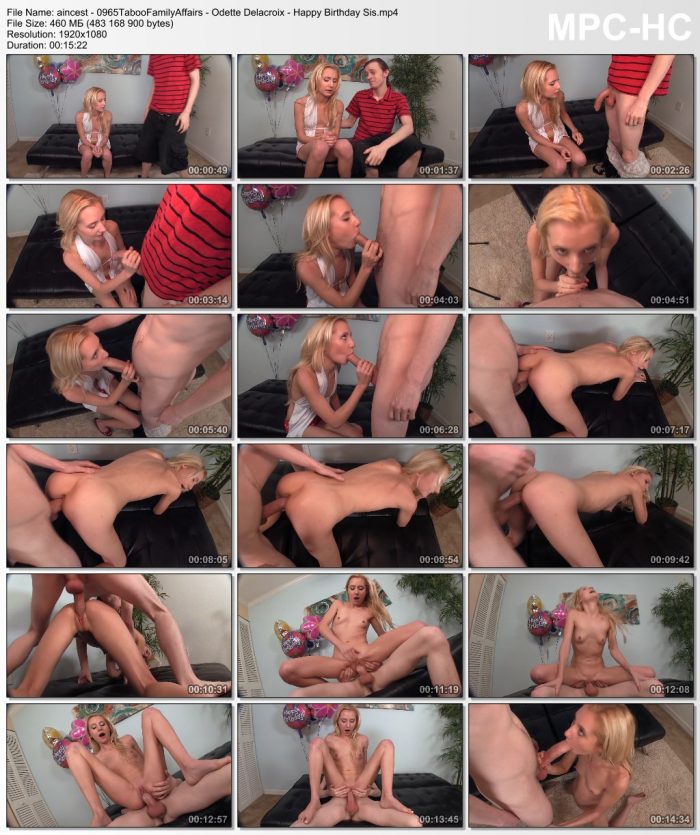 Fetish Model Odette Delacroix in her FIRST hardcore boy/girl scene!
Young Odette is excited about her 18th birthday party tonight. All her girlfriends are coming and ever the hot guy from school with the huge bulge said hed show up. I hope I get birthday sex tonight she thought to herself smiling. Odette makes sure her hair and make-up is perfect and heads downstairs. She walks into the living room and is taken back when she sees no one is there. Hello she calls looking around for people. Where is everyone? she says out loud. As shes looking around her brother Conor walks in. Hi sis, I uh.. have some bad news. Everyone canceled for your party he tells her.

Disappointed she slumps on the futon and leans on her brother. What Odette doesnt know is that her brother Conor called everyone and said the party was the next weekend so he could give her his special birthday night. He knew she was looking forward to the jock from school coming over but if anyone was going to give his sister birthday sex it was going to be him. She begins to tell him how bummed she is that her crush isnt coming over. He has a big dick she tells Conor using her hands. Conor smiles and tells his sister his cock is bigger than that. Odette shakes her head and tells her brother dicks dont come that big. Conor pulls down his pants showing off his soft but large dick to his sister.

OMG its so big! she exclaims. Odette sucks her brothers cock and is amazed that it keeps growing and growing to over 9 inches long. She shows Conor hes not the only impressive one by deep throating his long dick down to the balls. He bends her over the futon and slides inside her tight pussy. Conor gives his sister a good pounding from behind and then pulls her on top of him. The siblings fuck until he gives his sister a sticky treat to swallow. Odette tells him she had a great birthday. I got to have my cock and fuck it to