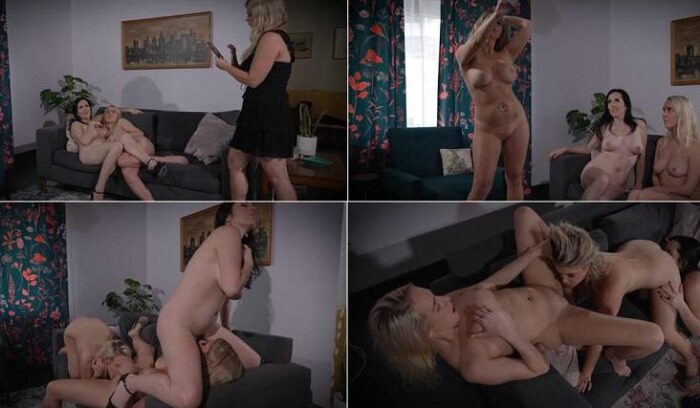 In the final chapter of this adventure, Carissa gets off the phone after Cadence has dumped her and knows that Tina has something to do with it so she rushes to Tina’s house and finds her and Cadence naked and making out. Carissa doesn’t know what Tina’s scheme is but she has now caught her red handed and pulls out her phone to snap some blackmail photos to show the Dean and get Tina’s tenure position once and for all. Of course, Carissa doesn’t know about Tina’s magic pendant and becomes distracted from her task when she sees the glittering crystal. Soon she is mindless and under Tina’s control. Deciding to have some fun before dealing with her nemesis, Tina has her strip down naked like her and Cadence so she can get a look at her body. She then has her take a bunch of graphic, nude selfies and post them to her personal Social Media page, knowing that it will cost Carissa not just her dignity but also her job. She then decides that, being now out of work, Carissa should find a new profession and suggests, due to her bangin body and good looks, that she’d make a great stripper. She has Carissa give her and Cadence a dirty lapdance and in the process they all get so turned on it evolves into a lesbian three-way. Tina has Cadence lick Carissa’s pussy while she rides her face and then they swap to both get a taste. Finally, when everyone has had a nice afternoon orgasm, Tina sends Carissa off without her clothes to audition at the local strip club while she prepares to release Cadence from her spell, but Cadence might have a surprise or two up her sleeve as well.