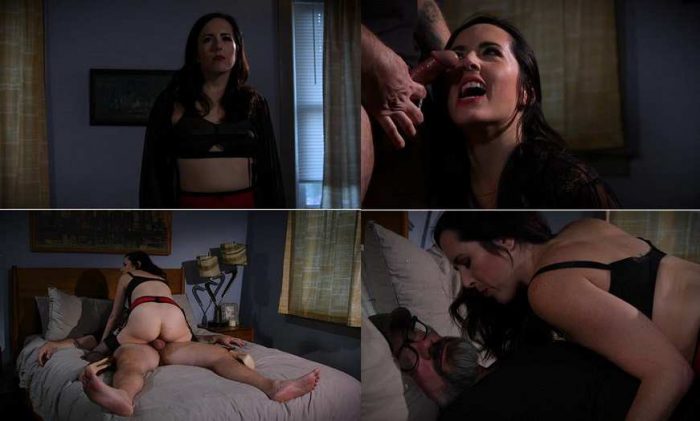 In the season finale, head Vampire hunter Nate has looked to the ancient texts to find some way to combat the Vampiress after she’s taken out most of the House of Slayers and he’s about the last hope. He finds an archaic spell that he believes will allow him to control the Vampiress and make her obey his commands. There’s nothing left for him to do but to head into her lair and confront her. She certainly knows he’s coming and is expecting him but is actually surprised as well as thoroughly amused when he drops his stake and instead opens a book and begins to recite old human gobbledygook. Her laughs fade, however, when she attempts to glamour him with her ring and nothing happens. The spell worked and now she is under his control, unable to resist his commands. Fortunately for her, the human is greedy and just as hungry for revenge as she is for what pumps through his veins. Instead of ending her immediately while he has a chance, he wants to humiliate her first, he informs her as he gropes her compliant body. He commands her onto her knees and takes out his cock, forcing her to suck it. He fucks her face, roughly until he shoots his load all over her and then goes back to his bag for his stake to finish things. When he turns his back on her, she knows it’s her chance and she sucks down the soul she’s been keeping in a jar to turn herself temporarily human and erase the effects of the anti-Vampire spell. She quickly handles things the old fashioned way, knocking him over the head and taking charge of the situation. When he awakes he is laid out on the bed with her circling him seductively. He tries to get up but the spell is broken and her Vampire powers have returned, making it easy for her to keep him helpless. She has a little revenge of her own in mind as she pulls off his shorts and jumps on top of him, sliding his hard cock into her pussy. She’s not going to settle for just one type of bodily fluid this time as she drains his cock into her pussy before biting his neck and draining the rest of him.